The Unitarian Fellowship of Redwood City was formed in June 1959 by a small group of Unitarians who believed there was enough interest in the Redwood City area to justify a liberal religious organization. With the generous help of the Palo Alto Unitarian Church, the Fellowship began with 52 charter members. It was lay-led from 1959 until the spring of 1965, with both its business and Sunday morning programming under the direction of its members and elected Boards of Trustees. During this lay-led time period, there were several ministers who provided consulting and pastoral services to the congregation. 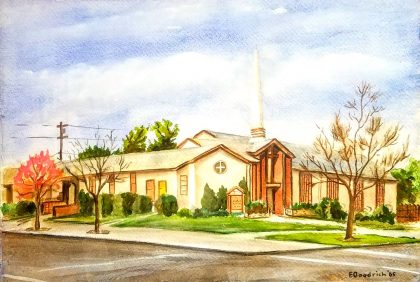 Original meetings were held in the YMCA, with subsequent moves to member homes, a Seventh Day Adventist Church, Peninsula School in Menlo Park, and in a Menlo Park recreation building. With the need to find a permanent home, the Fellowship began a capital fund drive in 1965. In 1967 we purchased our present building for $148,000. A watercolor painting of the original building with the steeple now hangs in our church office. Through the dedication and generosity of our membership, the mortgage was paid off in February 1984, the year we celebrated our 25th anniversary as a Fellowship!  This is also the year that our metal chalice sculpture was installed at the front of the sanctuary.

The Fellowship moved from lay-led status to settled ministry in 1965 and over the next 18 years were served by five full or part-time ministers. In 1983, the congregation voted to return to lay-led status, and operated for a decade with the membership once again providing its own leadership, pastoral care, and Sunday morning programming. In 1993 we changed our name to include “Universalist,” becoming the “Unitarian Universalist Fellowship of Redwood City.”

In the spring of 1994, the Fellowship decided once again to enter into relationship with a professional minister, benefitting from the relationships we forged with Rev. Judy Welles, Rev. Rachel Anderson, Rev. Julia Older, and Rev. Stefanie Etzbach-Dale. We are currently in Interim Ministry with Rev. Gretchen Woods, as we work towards calling our next minister. We are excited to start the next chapter of our journey, continuing our growth with energetic and loving leadership, insightful and stirring worship services, and sensitive pastoral care.