At the Unitarian Universalist Fellowship of Redwood City, our history and stories are an important part of our continuing journey. We honor our past, and grow from that foundation in our shared community. You can read about a few of our stories below, and also learn about our history, our unique chalice special to UUFRC, and hear some of our members share the value the Fellowship brings them. 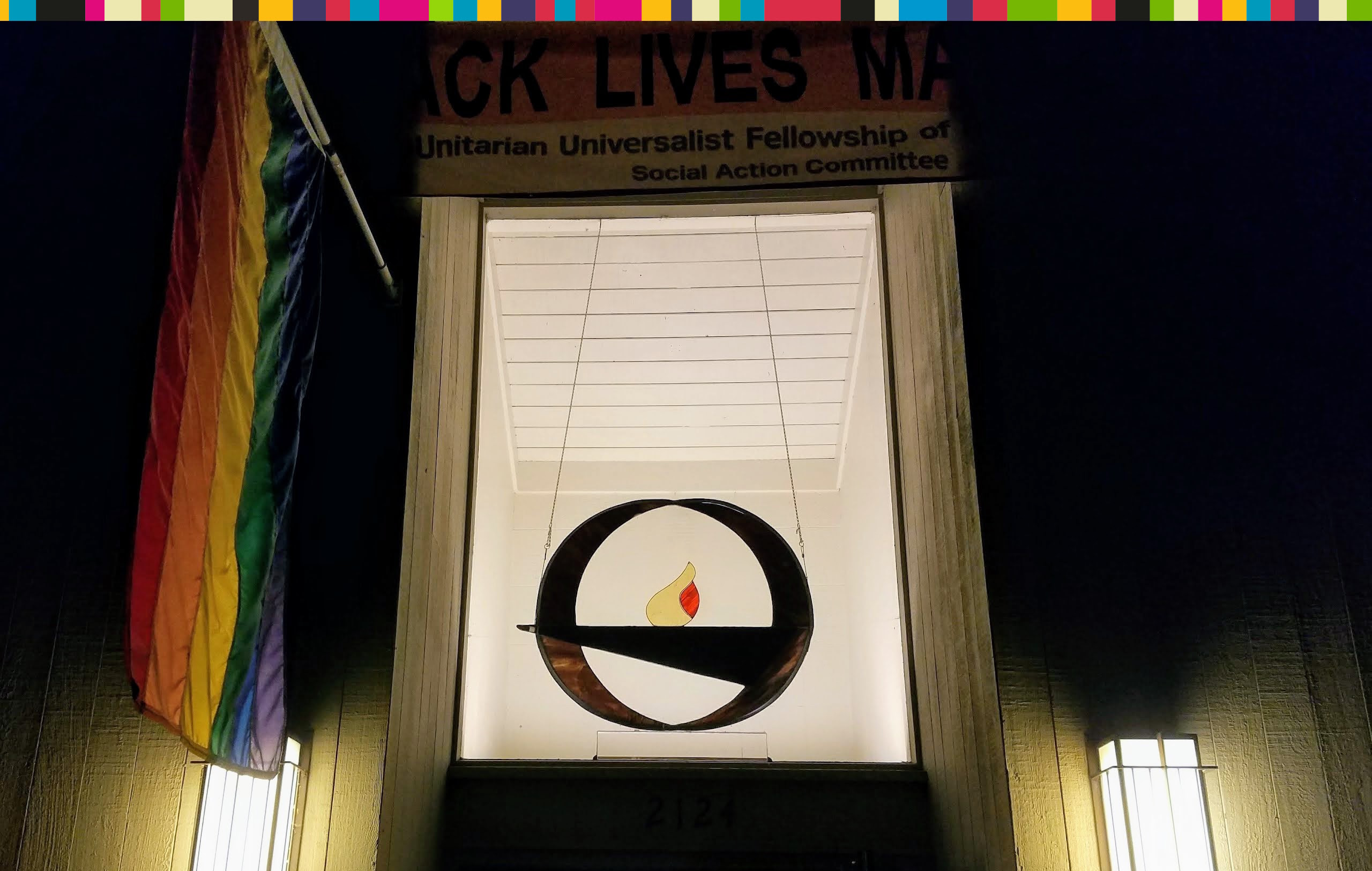 Here are some of the short stories that reflect something about who we are today.

In the early sixties, before most people even knew about napalm, our congregation decided to march on the local napalm factory to bring attention to the issues. One evening, our members embarked on a trek through Redwood City toward the factory, carrying signs, singing and picking up people along the way, until we had gathered a fairly large assemblage. Local news coverage was attracted, and the group had attained its goal.

Late in the 1960’s, the Rev. George T. Johnson, our minister at the time, recorded two albums during his concerts at the Fellowship. The second one was entitled “Harlem of My Childhood” and focused on the issues of racism.

There are reports of anti-Vietnam War activists being camped out on the lawn of UUFRC for a few months.

In the early 1970’s, the congregation gave support to one of its members and her family after her husband was killed in a motorcycle accident. Her father, Ansel Adams, donated a photograph of a scene in Yosemite to honor the care the congregation had given his daughter. Some fifteen years later, due to financial and security concerns (we could no longer afford to adequately insure it) the photograph was sold, netting UUFRC $20,000. The decision to sell the Adams photo was a very emotional one, and we didn’t want to have the money jus “disappear” into the general budget. It was decided to set it aside in a restricted reserve account under the control of the Board of Trustees, and remains there today.

In the late 1970’s, UUFRC began a very special relationship – which continues to this day – in renting to a small nursery school called Open Gate. Early in the relationship, the little school was put in jeopardy by complaints from neighbors, who went to the city’s Planning Commission and got an order to shut Open Gate down. Even though there had been dissenters in the decision to rent our space to the little school, the congregation rallied around them and mounted its own campaign to “save” the school, filing an appeal with the City Council. At the deciding meeting, the Council chamber was filled with both Open Gate families and UUFRC members, and the little school was granted its Use Permit. Open Gate and UUFRC have lived happily together ever since.

In the 1980’s, UUFRC became a Sanctuary Church, providing sanctuary to three young men from El Salvador. The congregation even helped to obtain political asylum for one of the young men. Members of our congregation also visited El Salvador to witness and give support to the people in that country.

In the spring of 1999, after several years of study and discussion, our congregation voted unanimously to become a Welcoming Congregation – installing a rainbow flag as symbol of this designation.

In 2005, in support of the environment and our interdependent web of life, UUFRC began to seriously contemplate how we could lessen our impact on the environment. Over the next six years we installed solar panels, low flow toilets, hot water on demand, and in an effort to cut down on use of disposable products, switched to using cloth napkins made by members of the congregation.  We received Green Sanctuary accreditation in 2011 for our efforts.  In 2015 we began taking out the lawns and have since replaced them with native, drought tolerant plants. This will reduce our water use substantially.

We began giving back to our Unitarian Universalist faith by hiring and working with intern ministers, helping to assist and support them in their journeys to becoming UU ministers. Nina Kalmoutis served as intern minister in 2007, Michelle Collins in 2010, and Carol Thomas Cissel in 2012.

Reaching beyond our walls, we joined Peninsula Interfaith Action in 2005, an active group of 17 different faith communities working together to identify and work on solutions to current issues within our local communities. In 2007, UUFRC identified education inequalities as an issue they felt was a top priority within our elementary schools, and began a tutoring program at Roosevelt School in Redwood City, which continues to this day.

More recently, between 2014 and 2017, our lawn was transformed into a drought-tolerant garden, a new chancel table and a Black Lives Matter banner were installed, an Interfaith Committee was formed, and our commitment to children and to serving the wider community was integrated into worship services.